Stocks saw a gap higher at the open on the G-20 news that President Trump and China’s President Xi had reached a compromise on trade issues. But the euphoria faded during the session. Conflicting reports from both sides on the details of trade negotiations caused the market to stall. It was unable to build on the sharp opening gap momentum. The indices closed off their highs but at or near their opening levels.

What this action did was create a doji star on the daily S&P 500 chart. A doji is a candle with an opening and closing range that is virtually the same or very narrow. It looks like a cross, although there are variations on the doji depending on where the open and close are situated in the overall range of the candle. These candles suggest investor uncertainty and are sometimes seen before shifts in trend, either at tops or bottoms.

There is a near perfect doji star candle on the daily S&P 500 daily chart. The index opened at 2790.50 and closed at 2790.37. It formed right above the 50 day moving average after the Monday opening gap higher. 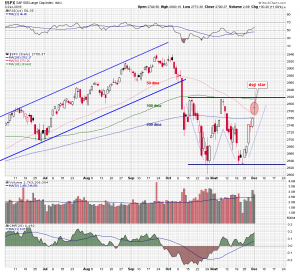 The action of the last two months has formed a well-defined “W” base pattern on the daily S&P chart. Pattern resistance at 2816 is delineated by the horizontal line drawn off the October and November highs. That line is currently being reinforced by the 100 day moving average. A break above this confluence of resistance would power a measured move higher that could see the S&P make new highs.

The attractive quality of a new high can have a strong influence on the market behavior.

We should know the answer to that question in a few days.