Tuesday’s sell-off was in sharp contrast to the rally traders had enjoyed just 24 hours earlier. Monday market elation over what was initially thought to be a positive G-20 outcome, had evaporated overnight.

On Tuesday morning it was clear that the specifics of the supposed trade truce were unclear. Markets started off the session lower and continued lower. The downtrend accelerated into the close.

There have been a number of
reasons posited for the drop. The foremost being the rise of the machines. Algorithmic trading platforms have come to dominate their human counterparts. And the similarities in the programs will often initiate a progressive collapse or an explosive rally.

Where does that leave us at this point in time and space?

In our opinion, right in the middle of a zone denoted by the volatile action seen over the last six weeks. Take a look at the weekly charts of the Dow Jones Industrial average (DJIS), the S&P 500 Index (SPX), and the NASDAQ Composite Index (COMPQ). 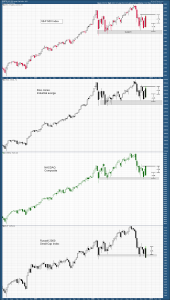 This week these indices opened up near their November highs. The quick 24 hour reversal in investor sentiment took them down about 4% off those highs. Coincidentally, they are also situated about 4% above their February and April lows. This puts their current location in the dead center of the six week zone.

The only exception is the Russell which is also down 4% so far this week, but the decline has already taken it back to its 2018 lows. It sits at the bottom of its six week range. Small-caps often lead the broader market, so action in the Russell should be monitored carefully.

So, for the broader market indices well-tested and seemingly solid support is 4% lower, and equally defined resistance is 4% higher. Specifically, resistance on the Dow is located around 2600, it’s 2820 on the S&P, and 7500 on the NASDAQ; as we said, the February/April lows are support on all of these charts.

Of course, it’s impossible to predict precisely how the market will close out the week. A presidential tweet, an interview on CNBC, or a fat finger error could trigger an algo rally or another mechanized slide.

But watch the support and resistance lines we outlined on the weekly charts.