Here are three charts with interesting technical patterns, that may be telling us something about the economy: 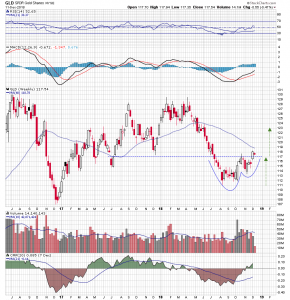 A simple cup and handle pattern has formed on the SPDR Gold Shares ETF (GLD) weekly chart. The measured move off the C&H pattern projects to the $123 level and it takes the fund back up through its 40 week (~200 dma) moving average.
Chaikin money flow has advanced into positive territory, suggesting new buying interest. Moving average convergence/divergence has made a bullish crossover reflecting positive price momentum.

The US Dollar Index has broken above the neckline of a large inverse head and shoulders formation on its weekly chart. This basing pattern projects a target price that would take the greenback to its former 2017 highs.

The problems in the financial space are well known. But arguably the best-in-breed name in the banking sector is breaking long term support. J.P. Morgan Chase (JPM) shares are trading below the $102.50 level and briefly moved below $100 in Tuesday’s session.
Moving average convergence/divergence has made a lower low in bearish divergence to price, and Chaikin money flow is in negative territory.

A long term downtrend line is being tested on the iShares Barclays 20+ Yr Treasury Bond (TLT) weekly chart. It is part of a very large triangle pattern. A breakout suggests much higher prices which would reflect a moderation in the 20-year treasury bond yield.

I’ll leave the fundamental interpretation and the economic implications to others.