More charts at interesting points of technical reference. Watching their progression can be educational and provide rewarding trading opportunities. 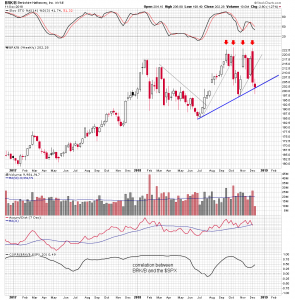 Berkshire Hathaway’s (BRK.B) price movement is closely correlated to the S&P 500 Index. At the highs of the last four moths, high wick candles have formed. It looks like a quadruple top has formed on the weekly chart. A quad top is rare but the stock has pulled back and is testing an intermediate term uptrend line drawn off the September and October lows.
A breakdown has negative implications for the broader market. 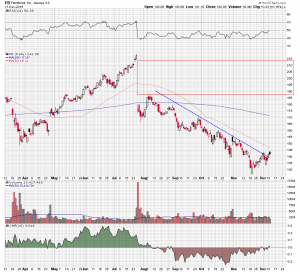 Shares of Facebook (FB) were hammered in July. The drop in the stock price created a large gap lower. Since then it has continued to track lower. This week shares moved back above the downtrend line that has defined the decline.
It is very early to suggest Facebook is turning around, but that massive gap is needs to be filled. It will probably take a very long time to accomplish, but you have to start somewhere. Watch for early basing action above the downtrend line.

Starbucks (SBUX) has been trading in and around a horizontal price channel for the last three years. It now looks that it has decisively broken through channel resistance. The channel pattern projects an upside target measured by taking the height of the channel, and adding it to the channel resistance level.
Shares have reached that goal and have been consolidating those gains. In the process, they have formed a bullish flag pattern. A break above flag resistance projects another 13% of upside.