Twitter (TWTR) shares rose nearly 100% in the first half of the year. Then they proceeded to retrace 45% of that gain before making their October low. Now the technicals are setting up for another possible jump in the stock price.

In the first half of this year, Twitter traded in a range bound by the Fibonacci retracement levels of its 2017 low and 2018 highs. They broke above the 38% retracement level in May and quickly rallied to their July high. Unable to hold those gains the stock price fell back into the previous Fibonacci range.

They are currently trying to break above the 38% retracement level again. The action on the weekly chart can be seen in more detail on the daily time frame. 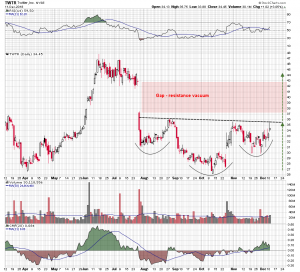 A wide inverse head and shoulders pattern has been under construction on the daily chart for the last four months. Neckline resistance is downward sloping and currently in the $35.50 area. Above it is a large open gap created by a drop in the stock price in July.

This gap is a resistance vacuum, meaning that there is nothing in the way of the stock price accelerating through it, and up to the $43 area. A move of this magnitude would correspond with the measured move off the inverse H&S pattern, which projects to the top of the gap. That potential rally move would also take Twitter shares back up to the 50% retracement of its all-time high/low range.

Twitter looks ready to break out and a successful attempt could potentially result in a 25% gain in the stock price.