The SPDR Gold Shares (GLD) have spent the last four years trading under resistance in the $130 area. This level has been retested multiple times and held firm. But it looks like another test is in the offing.

The low on the GLD monthly chart was made in December 2015, a higher low was made on December 2016, and a second higher low in October this year. This is positive technical action. In addition, the December monthly candle is a white marubozu, that is, a candle with no lower or upper shadow. An candle open at the low and close near the high is bullish price action.

On the weekly time frame, the Gold Shares ETF has broken out of a cup and handle formation with rim line resistance in the $117.50 area. The move took shares through the 40 week (~200 day) moving average, and the pattern projects an upside measured move to the $124.50 area. 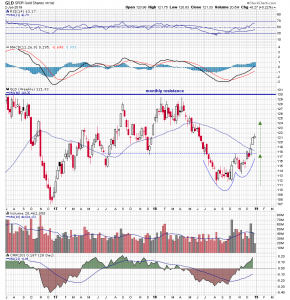 The bullish higher lows on the monthly chart combined with positive price momentum readings on the weekly MacD and relative strength indicators, as well as a Chaikin money flow reading well into positive territory, suggest that the GLD could be headed even higher than the projected target price.

It is likely another test of the monthly $130 level resistance is underway. So, what if that level is broken? A breakout from the long term base foundation projects a minimum move of about $20, which would takes the GLD to the $150 level.

This is pure speculation but if it were to occur, it would represent a more than 20% advance from the current price of the Gold Shares ETF, and would probably be derived from some deeper undercurrent in the broader market. Not sure what that undercurrent would be but the implication is that it might not be a good thing.