In December the major market indices dropped sharply and broke below areas of former support on their weekly charts. These zones had provided strong support in February and April last year, and later in November. 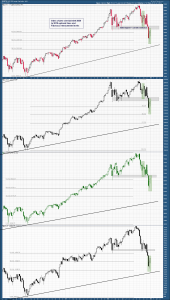 The market was able to halt the decline in the last weeks of trading of 2018 and book two solid weeks of upside action. But now the indices are approaching their former support-turned-resistance levels. What was once solid support is now formidable resistance. How the market handles these first tests could be critical in determining their intermediate-to-long term direction.

The nature of market participants suggests there is likely to be selling into these areas. Some long term investors will be happy to recover nearly half their losses since the October highs. Likewise, traders quick enough to have jumped on board this reversal move, will be just as quick to take their profits.

But just as solid resistance can repel, sometimes V-shaped bounces gather momentum and can pierce through tough resistance areas. The broader market’s long term directional trajectory will depend on the integrity of the zone.