Microsoft (MSFT) reports after the cloe on Wednesday. The stock is down over 2% in afternoon trading on Tuesday and has dropped below its rising 200 day moving average. But over the last year, the Microsoft has been a strong outperformer relative to the Technology Select Sector SPDR Fund (XLK). 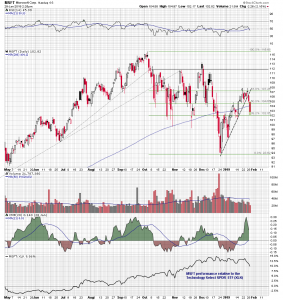 Let’s look at the daily chart of Microsoft. Shares were not immune to the October to December decline in the broader market. They dropped about 18% in that time but did bounce sharply off their Decmeber low. The bounce briefly returned the stock price to the 62% Fibonacci retracement level. A pullback this week took the low today back down to the 38% retracement level.

That 38% retrcemen level is supplying some support but price action so far this week, just ahead of earnings, has been bearish. The relative strength index has moved below its center line and, while Chaikin money flow is still in positive territory, it has dropped over the last several sessions. Volume is weak and has not supported the bounce off the December low. 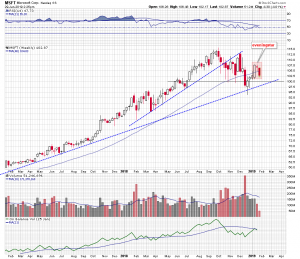 The price momnetum and money flow readings on the Microsoft weekly chart are also bearish. But the potential for an eveningstar pattern to form on this timeframe is particullary negative.

The evenigstar formation is a three-day bearish reversl pattern often seen at market tops. It consists of a large up-day day candle, followed by a narrow opening and closing range “doji” candle, and completed by a large down-day candle. We are currently seeing a large down-day candle on the chart, but it is only Tuesday and there are three more days left in the week for the candle to mature.

It is a pretty safe bet that a negative earnings report on Wednesday, will help form a dark candle on the weekly chart. The completed eveningstar pattern would then suggest that a retest of the long tern uptrend line, currently situated just below the $100 level, is a strong possibility. As we know, round numbers like the $100 level can act as support or resistance, for no particular reason other than a pschyological one.

If the report is positive Microsoft still has a lot of work to do to get back to its old highs, on the other hand, a break below the $100 to $98 zone of support suggests a quick test of the December low or worse.