Over the last 52 weeks McDonalds (MCD) shares outperformed the S&P 500 index by about 8%, but year-to-date they have underperformed by that same percentage. The stock is not participating in the current broader market rally and a double top may have formed on the daily chart. 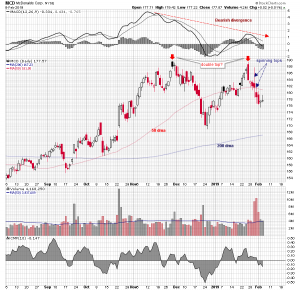 McDonalds high in November touched the $190 level but then the stock price quickly reversed direction, dropping $20 to the December low. Shares began to rally at this point along with the broader market, but about two weeks ago after returning to the $190 level, a large bearish engulfing candle formed. That signaled another top and and the stock price began to fade.

This reversal was presaged by the bearish divergence in the moving average convergence/divergence oscillator (MacD) which made a lower low as the stock was returning to the $190 level.

Since the engulfing candle formed and the stock price started to reverse to the downside, two high wick shooting star candles and a several red or dark body candles have formed on the daily chart. High wick candles after strong upside moves are a warning sign, as is a bearish large body candle.

McDonalds shares are back below their 50 day moving average and Chaikin money flow has moved into negative territory. All this as the broader market continues to rally.

Further downside that takes out last week’s $176 low, would likely be the catalyst for another test of the December low and the 200 day moving average.