Activision Blizzard (ATVI) shares have collapsed since the October 2018 high. They retraced more than half of their incredible rally off the 2015 low.

The company is reporting earnings after the close today and may announce plans to layoff workers because of slowing sales.

The good news is that the stock price has dropped to just above a wide zone of support situated between $39 and the $34.75 levels. The bad news is that even in the unlikely event that Activision rallies off the report, all the support levels broken on the way down become resistance on the way back up.

Any recovery process will likely be long and arduous. 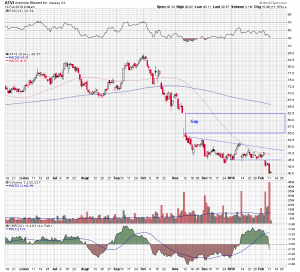 The daily chart shows several of the initial upside resistance levels. One positive takeaway from this chart is the very wide open November 2018 downside gap. Gaps are eventually filled is the old technical adage. If there is some potentially good news out of the call today, shorts may begin to cover and that vacuum of price action between $62.50 and the $55 levels could be quickly filled. Quickly, in this case, being a relative term.

The bottom line is that no one knows how Activision will trade after their earnings report today. The charts are a guideline and show levels of previous conflict between buyers and sellers. Those levels usually remain relevant when retested.