The Dow Jones Transportation Average has dropped back below its 200 day moving average and is testing an uptrend line that has been in place since the beginning of the year. 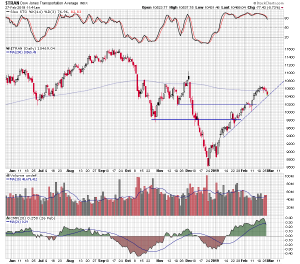 The 200 day average thwarted the transportation average’s advance several times at the end of last year, and one such test directly preceded the December drop.

Once again, the moving average is acting as resistance and the transportation average has pulled back and is retesting an uptrend line in place since the beginning of the year.

One of the worst performing stocks in the transportation sector is Schneider National (SNDR), a close second in under-performance was J.B. Transport Services (JBHT). Check out the interactive chart which includes C.H. Robinson Worldwide (CHRW), Landstar System (LSTR), and the Dow Jones Transportation Average. It compares relative performance in the group over the last year.

If the Dow Transports are rolling over it is likely that the worst performers will continue to lead their peers to the downside. 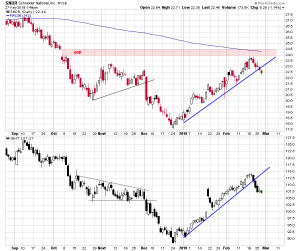 Both SNDR and JBHT are breaking below year-to-date uptrend lines on their daily charts. At this early stage in the potential decline they offer good risk/reward short-sale entry points.

Remember that shorting a stock is risky and if the trade does not include a close disciplined buy-to-cover stop, it can be very costly.