The eveningstar pattern is a three-period bearish reversal formation that consists of a white up-day candle, followed by a doji candle, one with a narrow opening and closing range, and completed by a red down-day candle. It represents a transition in investor sentiment from bullishness, to indecision, to bearishness. 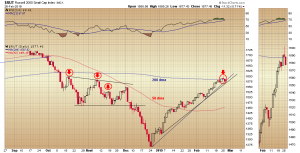 An eveningstar pattern has formed on the daily Russell chart. Similar patterns also formed in October last year and twice in November. They signaled tops. The current eveningstar includes a “gravestone” doji, which is a reversal candle on its own, with a narrow opening and closing range situated at the lower end of the overall range, and has a high wick.

When a bearish reversal signal forms after a period of strength or at a well-defined level of resistance, it takes on particular significance. The current eveningstar has formed at the 1600 level which has previously acted as resistance, and directly below the 200 day moving average. In addition, the relative strength index is in an overbought condition.

The Russell is not the only market index that has returned to an important area of resistance. In case you are not aware, the 2800 level on the S&P 500 index is, in fact, resistance. It has been widely reported on FinTwit and everywhere else. So, watch the Russell for a reversal because it is likely the rest of the market will quickly follow.