We saw some signs of life on the Apple (AAPL) chart yesterday. The stock price was only up fractionally, but the close was near the high of the day. This formed a strong looking bullish marubozu candle on the daily chart. 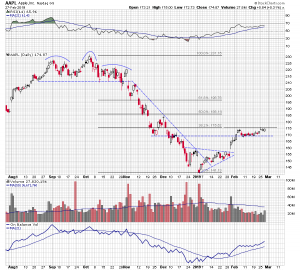 Notice the 21 period average of the relative strength index. It has been on a rounded bottom-like trajectory, basically in bullish divergence to price over the last month. This is a sign of improving price momentum. On balance volume has been rising this year and suggests buying interest. One negative is the lack of volume. That has got to improve if Apple shares are going continue to move higher.

Interestingly, the weekly chart shows that the 38% resistance level of the October 2018 high and this year’s January low, is also the 38% retracement level of the 2016 low to the 2018 high. The Fibonacci lines do seen to have had some influence as support and resistance on the way up and on the way down, in 2016 and 2018. The added dimension of shared Fibonacci levels would reinforce resistance in the $175 area going forward.

The action in Apple shares over the last month has been sedate. The market continues to struggle with exactly how to price its new hardware-turned-services profile. But a confirmed break above the $175 level might be a first sign that it is reaching some evaluation consensus, and a positive one at that.