Lately, Twitter (TWTR) seems to have fallen off the trader radar screens. There has just been less chatter about the stock on Twitter (irony not lost) or in the financial media. No doubt due to the fact the price action in the stock has been muted. 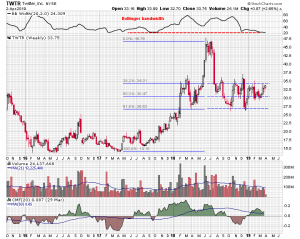 This year Twitter has moved in about a $4.00 trading range. Bollinger bandwidth which can be used as a measure of volatility, has contracted to the level seen just before the start of the 2017 rally. Periods of very low volatility are often followed by periods of high volatility.

The weekly Twitter chart shows the compressed price action over the last nine months. It has been contained to roughly within the Fibonacci retracements levels of its 2017 low and 2018 high.

The 68% retracement level provided support last year and the 38% retracement level, around $34, is acting as resistance. Volume reflects the disinterest of traders but Chaikin money flow is in positive territory, and above its 21 period signal average. 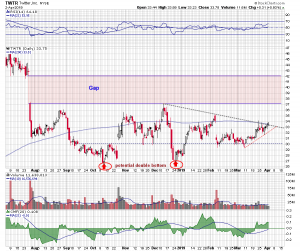 On the daily time frame, we see Twitter shares closing on Tuesday above the 200 day moving average, and the downtrend line drawn off the December 2018 and February 2019 highs. The relative strength index is tracking higher and well above its centerline, and Chaikin money flow is in positive territory. These readings suggest improving price momentum and buying interest.

Continued positive price action will get get the attention of traders. If the March trend continues, a test of the $37 gap bottom would be the first upside target. Vacuums offer no resistance or support once they are entered, and the intermediate term objective would be to fill the gap.