In January this year, the price of West Texas Intermediate Crude and the oil services sector stocks, as represented by the VanEck Vector Oil Services ETF (OIH), both jumped higher.

In February their upside trajectories flattened out. Then in March crude prices began to rise again but the services sector lagged behind. This month the OIH has continued to move sideways forming a horizontal channel pattern.

But that consolidation dynamic may be about to change, as the OIH looks poised to breakout of the channel pattern. 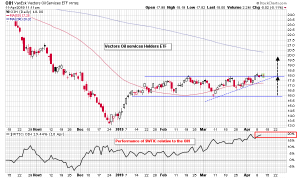 If the OIH does breakout and move higher it could attempt to close the price gap between it and crude oil. Normally, there is a strong correlation between the price of crude and the services space. But that relationship has faded this year, with the under performance of the services stocks. It may be time for them to catch-up and normalize the correlation.

The OIH daily chart highlights the three month horizontal channel consolidation. Within its $2.00 range is a one month uptrend line. It has been tracking above the interior uptrend line to its current test of channel resistance, in the $18 area.

A successful channel breakout projects an initial upside price target in the $20 area which, at that point in time, would likely intersect with the declining 200 day moving average.