Normally the price of Square (SQ) has been very positively correlated to the price action of the Technology Select Sector SPDR FUND (XLK).

But that relationship has broken down since early last month. Even as the broader technology sector has continued to rally, Square shares have been either flat or lower. This week was a good example of the disconnect, while the XLK was up only a modest 1%, Square was down 6%. 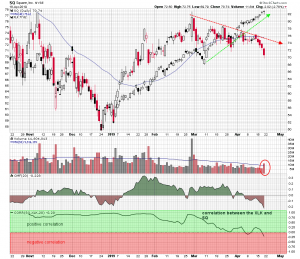 The daily Square chart is overlaid with the Technology SPDR chart. Simple trend lines show the inverse trajectories and the correlation coefficient graph in the lower panel shows the statistical difference.

Of note is today’s volume bar which moved over the 50 day moving average of volume for the first time since early last month. This is a 2.7% move lower and on relatively strong volume.

Chaikin money flow which represents accumulation and distribution has been in negative territory all month. The chart looks weak and the interpretation is that Square shares are headed lower.