The S&P 500 index is back to its September 2018 high. It has managed to retrace all of that late year decline. This means that traders who held on and rode out the volatility of the last five months are back to even. The adroit traders who sold near the highs last year and were prescient enough to time the low and re-enter the market, those folks are sitting on a pile of profit. Ironically, both of these traders will look took book their positions at the current highs.

It is basic market dynamics. The harrowed holders are relieved to be back to even, and the agile traders are proud to take profits. Old highs which are potential resistance seems like a good level to close out positions.

Yes, there will be those who may have missed out by selling at the lows. Some of those folks will buy the new highs because of fear of missing any more, but that strategy, at this point in a market cycle, often fails. 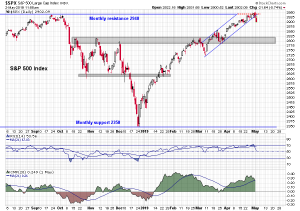 Mentioned in the video pinned at the head of this page, we expect the market to pullback, possibly significantly, from its current level. As Jim Cramer explained when RightView Trading was featured, once again, on the “Off the Charts” segment of Mad Money, we also expected this run.

At the time, which was early February this year, most traders were fixated on the 2800 resistance level, but we thought it would be broken and the 2018 highs would be revisited.

But, we also stated at the time that after the return to the new highs there would be a pullback, a potentially deep one that could over time, revisit the December lows. Why? Because of past consolidation patterns after long term rallies.

The weekly logarithmic chart of the NASDAQ Composite shows 12 and 15 month consolidation periods in 2011 and 2015-16 respectively. Currently, the market may only be 9 months into a similar process. This leaves plenty of time for erosion. If new highs are not made, traders and investors will lose confidence. Market sentiment and momentum can shift suddenly.

Time will tell. As we noted on Off the Charts the lines of support and resistance on the S&P 500 index chart should remain valuable technical levels to monitor.