Caterpillar (CAT) is a component of the Dow Jones Industrial Average (DJIA) and, as such, is a good measure of the condition of the traditional industrial sector. It’s machinery is used in mining, agriculture, infrastructure rebuilding, and many other areas of heavy construction.

Another aspect of Caterpillar’s importance is as a measure of the world economy, particularly, the China and emerging market connection. The use of its equipment to power the growth in those developing areas.

So, the direction and momentum of Cat’s stock price is an important analogue to the health of the US industrial market and the world economy. 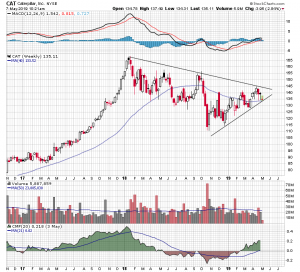 On the weekly Caterpillar chart, the stock can be seen making a series of higher highs and higher lows this year. The MacD reflects the positive price momentum and trend and Chaikin money flow suggests continued buying interest.

Shares were rejected last month after reaching a downtrend line drawn off an early 2018 high and another important high later in the year. This week the uptrend line that held the advance this year is undergoing a hard test. 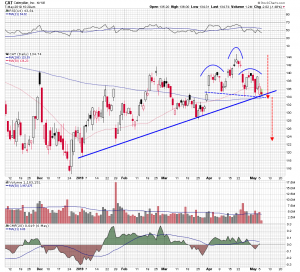 The rally this year can be seen in more detail on the daily chart. Note the price action over the last month. A head and shoulders top has formed with the neckline intersecting with the uptrend line, and the 200 day moving average.

On this time frame price momentum as measured by the RSI is declining and money flow is neutral. The $133.50 level appears to be critical support at this point in time.

The measured downside move of the head and shoulders pattern projects a retracement to the $123 area, which would erase a good portion of the 2019 rally.