Thursday on Twitter we pondered the possibility that a bullish morningstar reversal pattern could be forming on the $SPY daily chart. The only piece of the pattern missing was the third and final large bodied up-day candle. 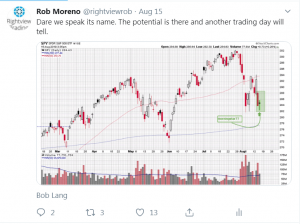 That was exactly what we got at the end of Friday’s strong session, with the formation of a large white candle and the third piece of the candlestick formation. For those unfamiliar with this pattern, please buy a book on candlestick charting and read it. In the meantime, a morningstar is a three day bullish reversal pattern. The first day is highlighted by a large dark bodied down-day candle, it is followed by a narrow opening and closing range doji candle, and is completed by large bodied up-day candle. 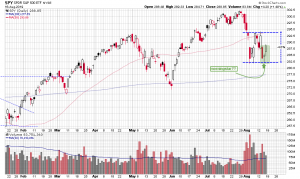 The combination of the three candles represents a transition in trader sentiment from bearishness, to a neutral posture, to bullishness. It is a beautiful name that coins an elegant technical metamorphosis from continued negative prospects to future optimist possibilities.

Continuing on, the morningstar and its sister pattern the bearish eveningstar pattern are considered by most chartists to be fairly reliable patterns. Ths is specially true when they form at important technical levels like moving averages or Fibonacci retracements. In the current case, it has formed at this month’s earlier lows. The 282.50 level is support based on prior bounces after the formation of hammer-like candles. Each of those 4% bounces that took the SPY back up to the $293.50 area, and the 50 day moving average. That is now consdered the first level of overhead resistance.

So, while the day-to-day machinations of the market seem erratic and without explanation, this turbulence is occurring within clearly defined levels of support and resistance. Your own trading style and stomach for volatility will determine if you can trade within the zone, or if you prefer to be patient and wait for confirmed breakouts from those levels of support and resistance, which that suggest the direction of the market over the intermediate term.