Disney (DIS) shares spent the four years between 2015 and 2019 consolidating in a triangular range. That range narrowed from $30 at its widest, to $15 at its most compressed. In April this year Disney broke out. The breakout can be seen on the weekly chart.

The long consolidation period formed a triangle pattern on the weekly chart. The triangle is defined by a series of higher lows under horizontal resistance in the $115 area. Like many technical patterns it projects a potential upside price target if the stock breaks above resistance.

The price projection is arrived at by taking the height of the triangle and adding it to the breakout level. The weekly Disney triangle is $30 wide and if you add that to the $115 resistance level the result is a $145 price target. The arrows illustrate the projection process.

Disney stock touched the projected $145 price target level in July. It has since pulled back to $130, just above the 40 week moving average. A pullback is expected after a technical target is achieved, but Disney shares may be in for more than a pullback.

Notice the overall price action over the last two quarters. It is ominous to say the least. A well known bearish reversal pattern has formed, especially noteworthy because it follows the completion of the longer term weekly move. It suggests the upside momentum in Disney is exhausted. The daily chart illustrates this in more detail. 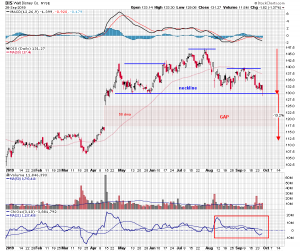 A head and shoulders reversal pattern can be seen more clearly daily charts. The left shoulder formed in May and June, the head in July, and the right shoulder in August and September. Right shoulder upside resistance is supplied by the 50 day moving average. That average is also rolling over. Again, the horizontal neckline is located around $130.

This, in effect, isolates Disney’s price action since May. If there is a neckline breakdown and it is severe enough to cause a gap to the downside this time, it would create an island head and shoulders top. Individual or group island reversals have greater significance than normal reversals. They represent abrupt changes in trader sentiment often brought on by important and unanticipated fundamental events.

In the daily scenario as in the weekly, the pattern projects a price target. The daily head and shoulders target price is measured by taking the distance from the head of the pattern to the neckline. Then by subtracting that $17.50 number from the $130 neckline you arrive at a $112.50 price target. This would close the April gap, which in and of itself is a vacuum that needs be filled, and represents a 13% downside retracement.

The current outlook for Disney shares is bearish on both the weekly and daily time frames. The previous weekly triangle pattern played out perfectly, achieving the projected upside price target. The daily head and shoulders pattern is clearly defined and a confirmed break below neckline support projects significant downside.

There is no guarantee, however, that the daily pattern will play out as well as the weekly pattern, if it plays out at all. Confirmation of these patterns is, of course, important and traders should not be afraid of missing the early stages of a potential move. They should be patient and wait for the move to develop.

Of note, on the daily chart is the hammer candle that formed on Thursday right on the neckline. It suggests a bounce but does not change the intermediate to longer term outlook.

Patience and proper money management are the keys to longevity and success as a trader.