Shares of Dunkin’ Brands (DNKN) have been trending higher since early 2016. The move from $35 to its current level of $78.14 represents a 122% advance. But as the rally in the stock progressed there were also periods of retracement along the way. Two technical conditions on the weekly chart have signaled several of these recent pullbacks. 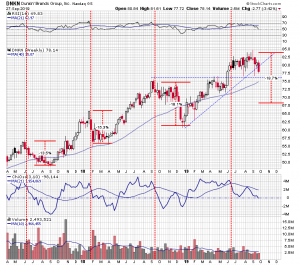 At the top of the chart is the relative strength index or RSI. Overlaid on the RSI is a 21 period moving average of the indicator. When the RSI line has crossed below the 21 period average the stock price has declined.

This bearish synchronization of momentum and money flow indications has been followed by tradeable opportunities to short Dunkin’ Brands.

The conditions on the weekly Dunkin’ chart are different this time. We don’t see the initial coordination between the indicators that we saw in previous move. Additionally, price while it has drifted lower, has not broken down. There is, however, a well-defined line of support situated in the $76.50 area, and the technical indicators are now in sync. If Dunkin’ shares were to penetrate this $76.50 support level the downside could be deep.

The percent declines of the previous pullbacks have increased over time, and if there was another pullback, even one the same degree as the December 2018 retracement, there is the potential for around 18% downside. This percentage move would take the stock price down to $68.50, in a relatively short period of time.

Watch the $76.50 support level for a tradeable breakdown, but don’t get ahead of the trade. Confirmation is required before trading. The previous bearish pattern could fail to play out this time and support could hold. It that case, Dunkin’ Shares should bounce, potentially retesting their highs.