The S&P 500 index gapped higher last Friday but, as I noted in the previous post, the initial move faded and the close was well into the day’s lower range. That pull back formed a spinning top candle. A spinning top and also the doji candle, is a candlestick whose close is at or near its open. 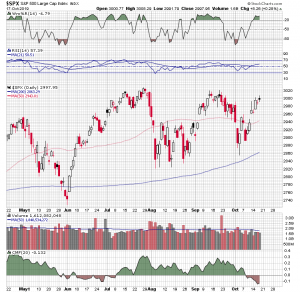 The inference to be drawn from one of these candles is that the market is conflicted. In this case, it is skeptical of the early strength and retreats back down to a more neutral position. Take a look at the 30 minute S&P chart.

The last seven sessions have taken the S&P higher. It is back above its 50 day moving average and approaching its all-time highs. But as we have noted a series of higher wick candles have formed and volume is weak. Aditionally, the Chaikin Index, a gauge of money flow, has turned into negative territory just as the recent upside began, and this week it has continued to decline.

The combination of the high wick late session fades and an increasingly negative money flow reading suggest a lack of conviction behind this move towards new highs. But if the S&P can manage a new high it may encourage a stronger level of trader commitment. While a new high is a short distance away, it is going to take a strong effort to get there.

The thing to watch is the S&P weekly close. If trader resolve erodes any more the Index could see a decline that would have a negative effect on next week’s session. If, however, it can hold at its current early Friday morning level or higher, what had been indecision and uncertainty on the daily chart would translate to confidence and strength on the weekly chart. Note the strong white weekly candle at this early point in the today’s session. That would remain in place with a neutral close or get taller with a higher close, and either would be a strong positive going into a new week.