It was a good week for the market and a good month. Surprising, because in early October a major uptrend line on the S&P 500 was being tested and the technical indications suggested a breakdown. A breakdown suggested a major move lower. Instead, the S&P rallied right through October and finished the month and the first week of November near its highs. 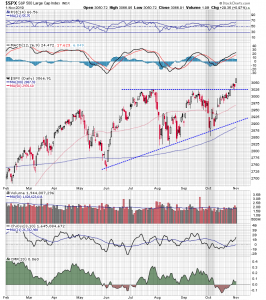 Confirmation on multiple time frames is good stuff but there is one small issue, and that is participation. Some stocks that should be moving higher with the broader market are not, and not just “some” stocks.

The S&P 500 has tracked higher since making a low in August this year. Now take a look at the performance of the FANG group in that time. The line chart represents their individual performance relative to the S&P 500 index over the last three months.

Only Alphabet (GOOGL) outperformed the broader index in that time and only by a percent. The FANG stocks are a diverse group of technology driven stocks, and it is unusual to see coordinated under performance.

Now for a group that should be expected to under perform in this lower interest rate environment the financials. The bar chart shows the performance of the S&P Select Sector SPDR ETF’s and the Financials (XLF) has been leading the way this month, along with the normally lagging Health Care sector (XLV). The financials are supposed to lag in a rising interest rate environment.

Leadership roles change but the loss of momentum in the FANG stocks as a group is unusual, because they are not a grouping of similar sector stocks. They are best in breed in their individual categories. And the out performance of the financial stocks going into a Federal Reserve meeting in which a rate cut was expected was unexpected, having the stocks continue to see strength after the rate cut announcement, just doesn’t make sense.

Fundamental contradictions or technical diversions do not contribute to a firm foundation for a longer term market rally.