A major bearish reversal pattern formed this week on the Dow Jones Industrial Average (DJIA) daily chart. It is called an evening star pattern and is considered by many technical analysts to be a reliable predictor of market tops. 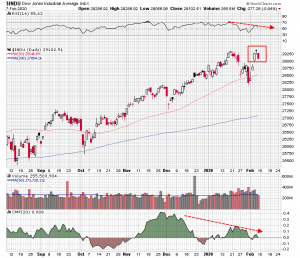 The evening star is a three-day candle formation that consists of a large white candle, followed by a narrow opening and closing range “doji” candle, and completed by a large dark candle. It suggests a transition from bullishness to bearishness. Initial price action powers a stock higher but follow-up buying fails to appear and the move falters. The stock then reverses its upside trajectory and reverts to the downside.

On the Dow chart there are technical indications that support the bearish evening star scenario. The Relative Strength Indicator made a lower high this week even as the index made an intraday high on Thursday. This bearish divergence reflects a loss in positive price momentum. Chaikin Money Flow at the bottom of the chart shows a steady decline in positive money flow over the last two months. It appears to be headed into negative territory below its center line.

A loss in price and money flow momentum combined with a major bearish reversal pattern at an all-time high is a dangerous combination of technical indications. They suggest an intermediate term top at best.

A worse case scenario develops if the February high and the January high form a double top. That would presuppose a top of longer duration and deeper downside. It is likely that a further February decline from the Dow’s current level would have many recognizing the double top potential. It could then become a a self-fulfilling prophecy.

The evening star strongly suggests a top in the DJIA of some duration. Like all candle patterns, however, it will require confirmation. This would come in the form of several strong down days with closing prices in the lower end of their candle ranges. On the other hand, a long term double top takes much longer to become apparent. A double top, usually observed in retrospect, provides context not a trading opportunity.

There is no denying the strong upside momentum in the market this year. It is has been powerful and often times defied technical logic. Confirmation before committing has never been more important.