The first that comes to mind when you think of Bitcoin ($BTC) is volatility. The digital currency has certainly seen some dramatic price swings over the last several years. But take a look at the weekly chart of Bitcoin and you notice something unexpected. While even the smaller swings in price represent large dollar moves, the movement over the last several years has mapped out well defined levels of support and resistance. In other words with the right perspective order appears under the seemingly chaotic and volatile price action in Bitcoin. 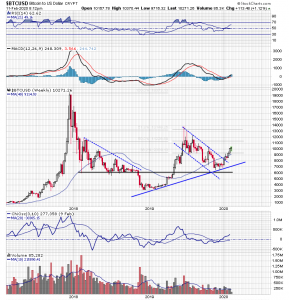 After Bitcoin’s huge sell-off in the beginning of 2018 the price of the coin found support in the $6000 area. Then it began making a series of lower highs above this support forming a triangle pattern. Triangle support was broken in November that year and the price of a coin dropped down to the $4000 area. At this point Bitcoin reversed direction and began a slow and low volatility grind ultimately arriving back up at the $6000 support-turned-resistance level.

The $6000 threshold was taken out in May last year and Bitcoin shares rallied hard, doubling in share price in two months. This jump took it up to the 62% Fibonacci retracement level of its 2018 range in July. Several high wick candles formed on the Bitcoin chart at that point in July. They marked the top for the year. In the last half of 2019 it made a series of lower highs and lower lows that delineated a declining channel. By December price had returned to the $6000 level or specifically the $6500 level and that’s where the decline was halted.

The transition in Bitcoin’s price from downtrend to uptrend that followed was not only based on support from the $6000 support level, but also from an uptrend line drawn off the early 2019 lows. The price action, again, creating well-defined levels of support and resistance.

Bitcoin appears now to be in the early stages of another uptrend above the two month uptrend line, the 40 week (200 day) moving average, and the 38% Fibonacci retracement level. In addition, moving average convergence/divergence has made a bullish crossover, and the relative strength index is above its center line and tracking higher. These indications reflect positive price momentum. The Chaikin oscillator is in positive territory suggesting positive buying pressure. Volume is light and that is the only technical negative. It will need to improve to support further upside.

Contrary to popular opinion the price of Bitcoin while volatile, has constructed well established levels of support and resistance. While often wide and expensive to trade, these technical levels have offered good entry and exit points.