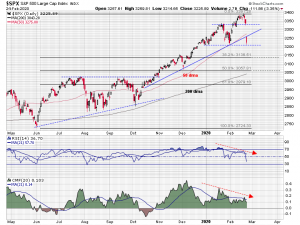 The daily chart shows several clear bearish technical divergences. Chaikin Money Flow is a measure or buying and selling pressure. It has been moving lower even as the S&P 500 made a new high in January and then again this month. The same bearish technical divergence can be seen in the Relative Strength Index, a measure of price momentum, in relation to the rising index. There was further technical evidence.

Two weeks ago RightView Trading was once again featured on the “Off The Charts” segment of CNBC’s Mad Money with Jim Cramer. At the time the broad market continued to trend higher but the technology stocks were clear out-performers. We noted that the S&P 500 was a market capitalized index and was heavily weighted in the technology space. The implication was that it was distorting the action in the index. 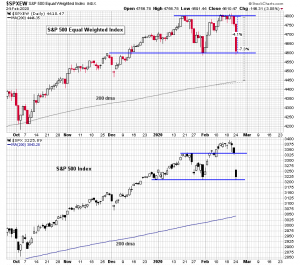 We suggested that the Equal Weighted S&P Index ($SPXEW) might be a better way to gauge the technical condition of the broader market. This index, as the name implies, gives equal weighting to all the components of the S&P 500 Index.

It was pointed out in the “Off the Charts” segment that the S&P 500 Index and the Equal Weighted S&P Index had been moving in horizontal trading channels since the beginning of the year. The S&P had just broken above its channel resistance level but the Equal Weighted Index had not broken above its channel resistance level. This we thought might be an additional bearish divergence signal.

The S&P 500 Index continued to track higher over the next six trading days but the Equal Weighted Index continued to bump up against its channel resistance level. Our expectation was that the Equal Weighted S&P Index was more likely to move down to its channel support level than break above its channel resistance level. That is what happened but in full disclosure we did not expect it to take place in one day. As expected the S&P 500 has realigned itself with the Equal Weighted Index. Now the integrity of the channel support on both charts will likely determine the intermediate term direction of the broad market.

So there were technical signs for some time that a decline was imminent. It hit hard in Monday’s session but those channel support levels while looking shaky remain intact. That’s a positive but they have to hold, the intermediate term health of the market is dependent on it.

(This is a re-cap of the segment of the show that was published on TheStreet.com that night.)