After the close on Monday I wrote about the bearish technical divergences that were present on the chart. The prior week RightView Trading was featured on the “Off the Charts” on Mad Money with Jim Cramer. In the segment we pointed out the bearish divergence between the Cap-Weighted S&P 500 Index, with a heavy concentration of technology stocks, and the Equal-Weighted S&P 500 Index.

Since then the S&P 500 has collapsed about 12% and pierced through several key technical levels on the daily chart. The trigger of course was the increasingly bad news about the coronavirus. But it was the fragility of the market that contributed to the magnitude of the decline. Here’s a brief review. 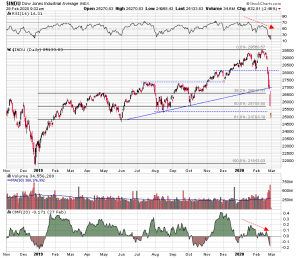 The first key level to go was the January low. It was penetrated quickly on Monday after a gap lower and the index closed right on the November high. The Tuesday session was particularly brutal. What should have been fairly robust horizontal support at the July/September high and the December low was taken out. Ultimately the S&P paused and found support at the uptrend line drawn off the June/October lows. On Wednesday it looked like there would be an intraday reversal but it failed. The S&P headed back down again and closed on the uptrend line where it had found support on Tuesady. This was something faintly poitive. A support line held for two consecutive days. But, on Thursday the S&P gapped lower again and in a day that some market pundits were saying had some sense of panic, the index dropped sharply. It finished at the October 2018 low. This is also the 50% retracment level of the December 2018 low and the 2020 high.

So where do we see downside support for the S&P 500 index over the short term? First up is the August low at 25340 and then the June low, which is also the 62% Fibonacci retracement level of the 2018 low to 2020 high. situated in the 24844 area. Below this zone there is very little in the way of obvious technical support. That’s another 4% of downside and we will take another look at the charts when we get there. Which could be later in today’s session.