Early gains in the big technology stocks faded later in the session on Tuesday, after the FTC said it will look into prior acquisitions by Alphabet (GOOGL), Amazon (AMZN), Apple (AAPL), Facebook (FB) and Microsoft (MSFT).

Furthermore, there is little doubt that the momentum in these names and their heavy weighting in the S&P 500 index has been a major factor powering the ongoing rally in the broader market. The anecdotal evidence is that they may have gone too far too fast.

The question then becomes: If these stocks are ripe for a retracement how do you play the pullback? 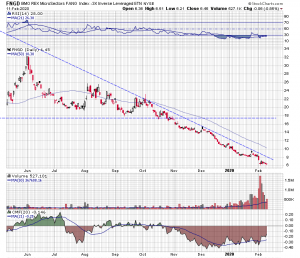 (not much to see on this chart)

The MicroSectors FANG+ Index -3X Inverse Leveraged ETNs (FNGD) is an exchange traded note that tries to reflect the inverse performance of the NYSE FANG+ Index on a daily compounded 3x or 300% leveraged basis. It is effectively a highly levered bet against the FANG stocks.

It goes without saying that any 3X leveraged fund, inverse or otherwise, is a very risky trading vehicle. Volatility can have tragic consequences for the less then extremely alert and nimble traders. It is not recommended for, well, nearly anyone, but if you have the skills then watch for signs of a bottom on the chart.

One important point to remember is that while are no signs of a technical bottom on the $FNDG chart, when it happens the transition will be quick.

The first that comes to mind when you think of Bitcoin ($BTC) is volatility. The digital currency has certainly seen some dramatic price swings over the last several years. But take a look at the weekly chart of Bitcoin and you notice something unexpected. While even the smaller swings in price represent large dollar moves, the movement over the last several years has mapped out well defined levels of support and resistance. In other words with the right perspective order appears under the seemingly chaotic and volatile price action in Bitcoin.

After Bitcoin’s huge sell-off in the beginning of 2018 the price of the coin found support in the $6000 area. Then it began making a series of lower highs above this support forming a triangle pattern. Triangle support was broken in November that year and the price of a coin dropped down to the $4000 area. At this point Bitcoin reversed direction and began a slow and low volatility grind ultimately arriving back up at the $6000 support-turned-resistance level.

The $6000 threshold was taken out in May last year and Bitcoin shares rallied hard, doubling in share price in two months. This jump took it up to the 62% Fibonacci retracement level of its 2018 range in July. Several high wick candles formed on the Bitcoin chart at that point in July. They marked the top for the year. In the last half of 2019 it made a series of lower highs and lower lows that delineated a declining channel. By December price had returned to the $6000 level or specifically the $6500 level and that’s where the decline was halted.

The transition in Bitcoin’s price from downtrend to uptrend that followed was not only based on support from the $6000 support level, but also from an uptrend line drawn off the early 2019 lows. The price action, again, creating well-defined levels of support and resistance.

Bitcoin appears now to be in the early stages of another uptrend above the two month uptrend line, the 40 week (200 day) moving average, and the 38% Fibonacci retracement level. In addition, moving average convergence/divergence has made a bullish crossover, and the relative strength index is above its center line and tracking higher. These indications reflect positive price momentum. The Chaikin oscillator is in positive territory suggesting positive buying pressure. Volume is light and that is the only technical negative. It will need to improve to support further upside.

Contrary to popular opinion the price of Bitcoin while volatile, has constructed well established levels of support and resistance. While often wide and expensive to trade, these technical levels have offered good entry and exit points.

A major bearish reversal pattern formed this week on the Dow Jones Industrial Average (DJIA) daily chart. It is called an evening star pattern and is considered by many technical analysts to be a reliable predictor of market tops.

The evening star is a three-day candle formation that consists of a large white candle, followed by a narrow opening and closing range “doji” candle, and completed by a large dark candle. It suggests a transition from bullishness to bearishness. Initial price action powers a stock higher but follow-up buying fails to appear and the move falters. The stock then reverses its upside trajectory and reverts to the downside.

On the Dow chart there are technical indications that support the bearish evening star scenario. The Relative Strength Indicator made a lower high this week even as the index made an intraday high on Thursday. This bearish divergence reflects a loss in positive price momentum. Chaikin Money Flow at the bottom of the chart shows a steady decline in positive money flow over the last two months. It appears to be headed into negative territory below its center line.

A loss in price and money flow momentum combined with a major bearish reversal pattern at an all-time high is a dangerous combination of technical indications. They suggest an intermediate term top at best.

A worse case scenario develops if the February high and the January high form a double top. That would presuppose a top of longer duration and deeper downside. It is likely that a further February decline from the Dow’s current level would have many recognizing the double top potential. It could then become a a self-fulfilling prophecy.

The evening star strongly suggests a top in the DJIA of some duration. Like all candle patterns, however, it will require confirmation. This would come in the form of several strong down days with closing prices in the lower end of their candle ranges. On the other hand, a long term double top takes much longer to become apparent. A double top, usually observed in retrospect, provides context not a trading opportunity.

There is no denying the strong upside momentum in the market this year. It is has been powerful and often times defied technical logic. Confirmation before committing has never been more important.

Mohammed El-Arian on CNBC today sees serious impact on world markets by the novel coronavirus: “It is big. It’s going to paralyze China. It’s going to cascade throughout the global economy.”.