There was a powerful wave of buying that swept through the market on Tuesday. The major market indices were up over 10% in the session, closing on their highs. It was a relief to investors after a month of what seemed like indefatigable selling. In addition to the the positive price and money flow momentum on Tuesday there was another positive development on the charts. A three day morningstar candle pattern formed signaling a possible reversal in the down trend. 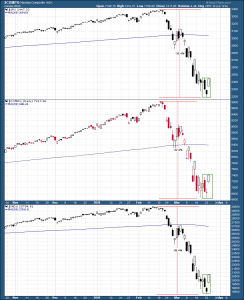 The daily charts of the major market indices illustrate their over 30% declines over the last several weeks. Highlighted in the green boxes are the three-day bullish reversal morningstar formations. The pattern consists of a large down-day candle, followed by a narrow opening and closing range “doji” candle, and completed by a large up-day candle. It represents a transition in investor sentiment, from bearishness to bullishness, and is considered by many technicians to be a reliable pattern. Here is a more in depth look at the morningstar formation from Investopedia.

The morningstar pattern like all technical chart patterns is created by the tension between buyers and sellers. It would normally reflect selling exhaustion and a sharp pivot to buying interest, often followed by a V-like reversal. But it is not likely that selling of the magnitude and velocity of the last four weeks would end so dramatically. More likely is that the low range would be drawn out over an extended period of base building. In fact, many market participants would probably prefer a more stable reversal bottom. Also, notice the price action in the indices back in the last two days of February and the first day of March. Rudimentary morningstar patterns formed on the Dow and the NASDAQ charts. This reinforces the need for confirmation when trading any technical pattern.

The bottom line is that the markets are under tremendous stress. Time will be required to properly repair the damage. The best medicine then is a slow but steady recovery reflected in a stair-step pattern of higher highs and higher lows. Hopefully, this morningstar pattern reflects a low on which we can build a solid foundation.