Johnson and Johnson’s (JNJ) Chairman and CEO Alex Gorsky said Monday on CNBC’s “Squawk Box” that human testing of its experimental vaccine for the coronavirus will begin by September. If the vaccine is effective the company said it could be available for emergency use in early 2021. That seems a long way off but it is much faster than the five to seven years it normally takes to develop, test, and produce a vaccine. In the interview Gorsky also said that the vaccine would be produced on a “not for profit” basis. 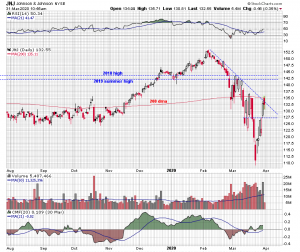 Johnson and Johnson shares jumped 8% to $133 on the news on Monday, finishing the session just below a two month downtrend line and its 200 day moving average. They opened on Tuesday at $135 but have pulled back at this early point in the session.

The daily chart illustrates the locations of support and resistance. It also shows the Relative Strength Index attempting to cross above its center line and Chaikin Money Flow situated in positive territory. If shares of J&J do see a meaningful pullback then the $127.50 area looks like potential support. The bottom line is that the downtrend line and the 200 day moving average are currently resistance. A close above this area could signal another phase to the upside move that began last week.

This is a link to a CNBC article on the interview and here is the video: