A cup and handle base formed on the S&P 500 Index daily chart. Rim line resistance is situated in the 2660 area, which is also the 38% Fibonacci retracement level of this year’s range. The index closed right on the rim line on Monday and opened today about 3% higher. 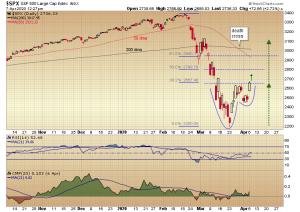 The Relative Strength Index, a measure of price momentum, is tracking over its center line. Chaikin Money Flow is in positive territory reflecting buying interest. So, the technical indicators support this basing move off the March low.

The cup and handle pattern projects an upside price objective. This target price is calculated by taking the height of the pattern and adding it to the rim line. In this case, it suggests a return to the 3100 area, back above the 200 day moving average. It should be pointed out that two weeks ago the 50 day average crossed below the 200 day average, the well know “death cross.” It is considered a longer term bearish indication. In a volatile market this particular cross is a less reliable technical indication.

It is not likely the S&P will continue higher in a straight line towards its target price. The more likely scenario is that at some point soon the rim line will be retested and should act as support. This is probably the preferred outcome because it would further solidify the cup and handle pattern as representing a well constructed base. The strongest rallies are built on the strongest foundations.