The NASDAQ Composite Index made an all time record high last week. At the same time the S&P 500 Index is about 10% off its February 2020 high and the and the Dow Jones Industrial Average is about 15% off its high this year. 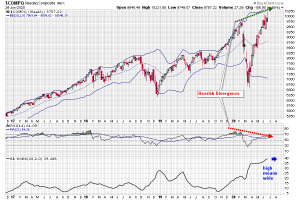 But take a look at the Relative Strength Index on the weekly NASDAQ chart. While the Composite made a new high the RSI did not. In fact, the RSI is moving lower. This is called a bearish divergence. Bearish technical divergences often precede reversals in price, or in this case of the index. 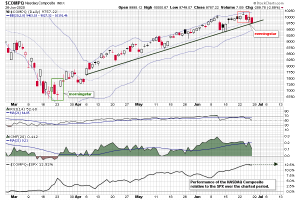 We took a look at the daily NASDAQ chart last week. We noted that the rally off the March low began with a bullish morningstar pattern and that now a bearish eveningstar pattern had formed on this time frame. The morningstar and the eveningstar look like perfect bookends to the start and the potential end of the three month rally. In addition, the NASDAQ closed out last week at the lower end of its candle range and is sitting tenuously on the uptrend line on the daily chart that defines the recent rally.

So, what we have is the Composite Index which has led the broader market higher, forming a bearish eveningstar reversal pattern right at a critical support level on its daily chart. In addition, a very pronounced bearish divergence between the Composite reading and the Relative Strength Index has developed on the weekly time frame.

This is multiple time frame confirmation of a deteriorating technical condition in the market leading technology NASDAQ Index. Be very cautious despite the strong Monday morning open.

The feeble but positive bounce on the daily charts of the major market stock indices on Thursday created individual doji candles on their weekly charts. A doji as we all know is a closing print at or near the opening price of a stock. Thursday’s session finished right about where the indices opened on Monday.

With the Friday open suggesting we could see another volatile session, the weekly candle formation could be more important than normal.

The chart shows the Thursday close on the weekly S&P chart. It is just about dead center of the weekly range and equal with the Monday open. It could, of course, close anywhere within that range but let’s look at three possibilities. If any one of those were to happen it would have particular technical implications for the current rend.

The first is that the S&P, after exploring different level returns to exactly where it is. It forms a doji. In this case, it would suggest uncertainty without any directional bias. If the market moved down during the day and closed at its lower weekly range the black candle that would form would be similar to a shooting star (illustrated). It is often a topping candle. Two weeks ago a large red bearish engulfing candle formed and together these two bearish candles would have a negative gravitational pull on the market. If the weekly close was near its upper range it would form a red hammer-like candle. A hammer is a bullish candle and its formation on a major moving average is even more positive.

So, watch the weekly candles. If you are unconvinced one way or the other by their formation or my analysis then don’t do anything. We’ll come in cold on Monday and reassess.

The 700 point drop in the Dow Jones Industrial Average on Wednesday took some people by surprise. Stocks can actually go down despite what Dave says. But seriously, it is a good time to take a look at the status of the index charts and get a feel for what they are trying to tell us. 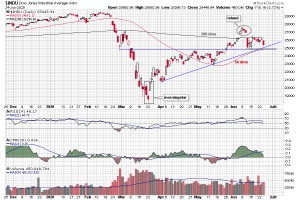 The daily Dow chart shows the text book four month stair-step rally. It began in late March with the formation of a morningstar candle pattern and has climbed back up to its horizontally trending 200 day moving average. If, in fact, it turns out that the Dow has made a top of some duration then the island grouping of four stock made earlier this month may have been a sign. Island reversals are considered important technical indications.

Over the last two weeks the industrial average has been trading in a 1000 point channel range. Topside resistance is being supplied by the 200 day moving average and support by an intersection of trend lines and the 50 day moving average. During this two week period the relative strength index has dropped below its 21 day average and its center line. This suggests a loss of positive price momentum. Chaikin money flow moved below its signal average and is heading lowering, reflecting a loss in positive money flow.

So, on one hand, the Dow average is losing some of its positive momentum, but on the other hand, there is reinforced support in the 25000 area which could be a platform for a bounce.

The action on the S&P 500 daily chart has been playing out very much like that of the Dow chart and the technical picture is about the same. It’s the NASDAQ Composite chart that requires the most attention. 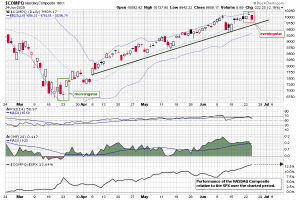 The daily NASDAQ chart shows the composite index climbing steadily off its March low above a strong rising trend line. It began with a bullish morningstar pattern and now, just this week a bearish eveningstar pattern has formed on this time frame. The positive technical take-ways are that the rally has taken place within the confines of the upper Bollinger bands, as well as the strong uptrend line, and the price and money flow momentum indicators look stronger than their Dow counterparts.

But the NASDAQ Composite chart is particularity important to watch because of its leadership role. The indicator at the bottom of the daily chart measures the percent difference in the performance between the NASDAQ and the S&P 500 over the charted period. We all knew that the Composite index was making new all time highs and that the other major market indices were lagging well behind. The graph at the bottom of the chart shows that since March the Nasdaq index has outperformed the S&P by nearly 13%. This diversion between the broader market and the NASDAQ composite cannot be sustained. The averages will return to a more natural alignment. This has the effect of the broader market pulling down the tech heavy NASDAQ. This then reinforces the weakness we see on the Dow and the S&P charts, and there is a sudden and swift correlated pullback.

The bottom line is that five large technology stocks cannot support this market forever. They will yield under the weight of their own market cap and take down a vulnerable looking broader market with them.

Everbridge (EVBG) is a software company located outside Boston. It’s platform and software applications address critical event management and it serves enterprises and government agencies. Here’s a link to an interview with the commpany’s CEO and a description of their “Covid-19 Shield.”

The daily chart shows the stock price consolidating this month in a rising channel above a rising tend line that goes back to April.

In trading on Tuesday, Everbridge shares attempted to break through a zone of resistance located just below the $140 level. It closed near the high of the day suggesting at least another attempt to penetrate the resistance area. The relative strength index is crossing above its 21 day moving average and centerline. This reflects improving positive price momentum. Chaikin money flow is crossing into positive territory suggestive of improving money flow.

The technicals point to a stock that is poised to move higher and the 14% short interest could initiate some covering. 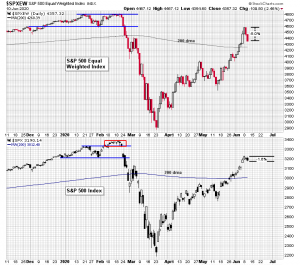