The feeble but positive bounce on the daily charts of the major market stock indices on Thursday created individual doji candles on their weekly charts. A doji as we all know is a closing print at or near the opening price of a stock. Thursday’s session finished right about where the indices opened on Monday.

With the Friday open suggesting we could see another volatile session, the weekly candle formation could be more important than normal. 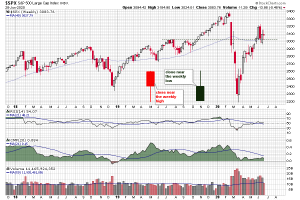 The chart shows the Thursday close on the weekly S&P chart. It is just about dead center of the weekly range and equal with the Monday open. It could, of course, close anywhere within that range but let’s look at three possibilities. If any one of those were to happen it would have particular technical implications for the current rend.

The first is that the S&P, after exploring different level returns to exactly where it is. It forms a doji. In this case, it would suggest uncertainty without any directional bias. If the market moved down during the day and closed at its lower weekly range the black candle that would form would be similar to a shooting star (illustrated). It is often a topping candle. Two weeks ago a large red bearish engulfing candle formed and together these two bearish candles would have a negative gravitational pull on the market. If the weekly close was near its upper range it would form a red hammer-like candle. A hammer is a bullish candle and its formation on a major moving average is even more positive.

So, watch the weekly candles. If you are unconvinced one way or the other by their formation or my analysis then don’t do anything. We’ll come in cold on Monday and reassess.