Yesterday we took a look at the Dow Jones Industrial Average chart. The primary focus was on the trend line resistance level situated in the 26,426 area which is being reinforced by the horizontally tracking 200 day moving average. A strong open suggested that the Dow was set to break above resistance and potentially move up to close the island gap. See the post here. 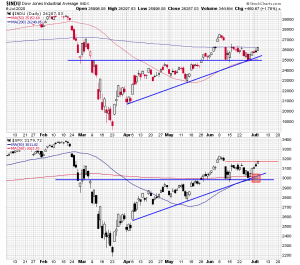 But the follow up to the open on Monday was flat and only accelerated a bit at the close. The resistance line held. Today’s open will be lower and we will see if there is downside follow through during the session or the move fades. In any case, it would be prudent to do the exact opposite of what we did on Monday morning, that is take a look at areas of support on the indices.

The chart shows the Dow Jones Average with the island still floating unattached above horizontal resistance. As we said that resistance was tested on Monday but held. Back down in the 25,000 level is a confluence of support. It consists of two intersecting trend lines and the 50 day moving average. It is a long way back down to that area but it is good to know its there.