Interest rates have been moving lower and for a long time. If you were on a fixed income like a pension during this period you’re a happy person. The low interest rate environment produced little or no inflation. This preserved the buying power of your income over time. If, on the other hand, you bought government bonds to supplement retirement income over the last ten years, it has been a different story. The yield structure you might have anticipated in your retirement years collapsed. You had two options: go back to work or go out on the risk curve to get more return, specifically buy stocks.

While a steady income is a comfort for retirees, reaching out on the risk curve actually payed off. The increased demand for return caused stock prices to move higher. The blue chip risk-reach produced both return and capital growth. This dynamic was the result of the Federal Reserve policy of lower short term interest rates.

But stock prices can’t go up forever, at some point valuation will matter. Likewise, interest rates cannot go lower forever. In fact there is little room for rate decreases and any future decreases would likely have a minimal effect on the stock market. So what if interest rates start to rise? Is there a way to profit from a rising interest rate scenario?

The ProShares UltraShort 20+ Year Treasury ETF (TBT) is an inverse exchange traded fund, and provides 2X inverse exposure to bond maturities greater than 20 years. It is a levered bet on rising interest rates. The TBT goes up when bond yields go up and interest rates rise. Take a look at the weekly 10 year chart of the TBT. Not pretty. It has headed lower along with the historic decline in interest rates. A positive correlation.

Now here is a six month daily chart of the TBT. This has some positive technical potential. 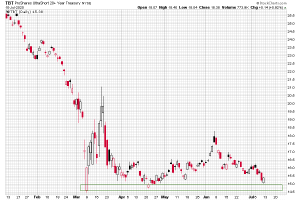 The TBT looks like it may be putting in a base or more boldly stated – a bottom. Over its ten year period of decline there have been many times when the TBT looked like it was building a base. But this time is a little different in the contextual of interest rates having basically reached their lower bound. Additionally, the lateral action on the daily TBT chart over the last four months has established a zone of support in the 15 to 14.50 area. In last Friday’s trading the TBT opened on that support and closed near the high of the session. This created a short-term bullish candle.

At this point in time, the chart suggests several possible outcomes. The first is that a triple bottom has been made and the TBT along with interest rates will begin to move higher. (My anecdotal observation over the years is that when rates rise they accelerate quickly.) Higher rates correlate to gains in the TBT. But another possible outcome is that rates remain near current levels and move horizontally, bumping along the support area. This second scenario is less positive for the TBT. Of course, there the third possible outcome that interest rates move to zero and the 15-14.50 support area is taken out. This outcome would be a clear negative for the TBT.

My opinion is that the lows for the TBT are in, based on the charts and the level of short term interest rates. It is not likely that the Federal Reserve will allow short term rates to move to zero, and they will do what they can to keep longer term rates from reaching that lower bound. So, the TBT at current levels seems a good risk/reward trade. Support is clearly delineated and if my hypothesis is wrong, a confirmed move below the 15-14.50 area provides a nearby exit point.