The Dow Jones Industrial Average ($DJIA) dropped below its 200 day moving average in early June. It’s been trading just below the horizontally trending 200 day average and more recently above a rising 50 day average. Over time this the area between the two averages compressed along with the Dow’s average true range and Bollinger bandwidth.

A period of price compression is often followed by a volatile resolution. This means that the Dow would be expected to make either a volatile breakout or breakdown. The Dow futures this morning suggest that it will be the former as they project a 500 point jump at the open. 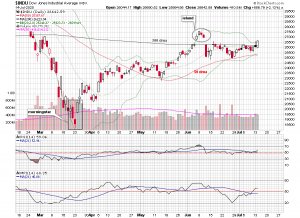 A positive DOW breakout was being forecast by two technical indicators. The Relative Strength Index has been tracking above its center line and is now above the 21 day moving average of the indicator. This reading represents positive price momentum. The Money Flow Index, a RSI measure of money flow, has crossed above both its center line and signal average.

The Dow’s upside targets are highlighted on the below chart.

The first upside target is the 27,000 level which would close the island gap that formed in early June. This close should be accomplished at the open of trading today. The second target is the June high an additional 500 points higher from the gap close. This shouldn’t be a high hurdle for a market with the current level of positive momentum. The third upside objective is a small open gap around 29,000. If that gap is filled then the magnetic effect of new all-time highs would likely levitate the DOW above the 29,568 level.

This is a lot of DOW speculation but it seems, at least at this point in time, that the only thing that could alter this positive scenario is negative news on the virus. But if investor sentiment is like a scale, then the negative virus news is currently being balanced out by the vaccine news. Hopefully, the vaccine news will begin to tilt the scale in the healthy and bullish direction.