The financial sector has chronically under-performed the broader market over an extended period of time. That dynamic may be in the early stages of a transformation. Last week the S&P 500 Index returned to its high of the year. This week it has made incrementally new all-time highs. By contrast the financial sector, as represented by the Financial Select Sector SPDR ETF (XLF), remains about 20% below its all-time February high. The technical interpretation of the charts, however, suggests things could change. The S&P 500 Index is historically extended and the range of the XLF is tightly contracted. A technical inflection point for both the index and the ETF is likely near, in time and price. 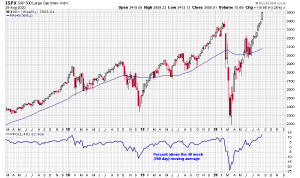 The first chart shows how the new highs on the $SPX have taken the index over 13% above its 40 week (roughly 200 day) moving average. This diversion from an important mean is historic and may be the widest in a very long time. It suggests a reversion to the mean of some degree and it will happen. The question is, of course: When? And that is unknown. The uptrend has been our friend for about five months and calling a top or even the start of a sideways consolidation period is not what we are implying in this post. 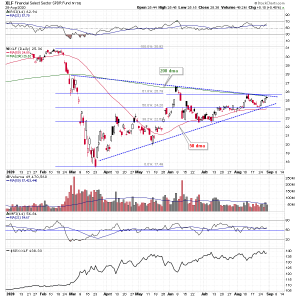 Now take a look at the Financial SPDR daily chart. The fund price has been contracting in a symmetrical triangle or wedge pattern for over four months. This action has delineated a clearly defined downtrend or resistance line and a well-defined uptrend or support line. The downtrend line is being reinforced by the declining 200 day moving average and the uptrend line is being supported by the rising 50 day moving average. The takeaway is that the XLF is being squeezed and a breakout or breakdown is imminent.

Now let’s pause and review what my experience with triangle patterns has taught me. The first thing is that the closer that price gets to the apex of the triangle, the less volatile the breakout or breakdown. Also, false breakouts or breakdowns happen often and patience is required to determine if the initial move is genuine or not. In our current case, the action on the XLF chart has taken price very close to the apex of the pattern. This suggests to me a potential false move before the start of a new trend. My guess is that the ultimate reaction will be a breakout and a continued move higher over the intermediate term.

The bottom line is that the $S&P Index looks extended while the XLF looks like it is poised for a move higher. The charts are the basis for the conjecture that the financial sector is ready to take on the role of out performer relative to the broader market. 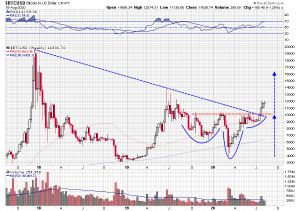