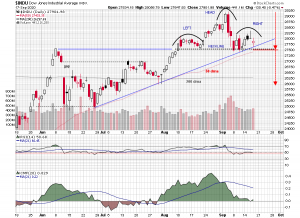 Last week the NASDAQ Composite broke the long term trend line that has defined the six month March/September rally. Since then it has been trading in a narrow range below that uptrend line and around its 50 day moving average. 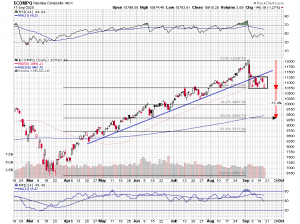 The price action since the NAZ made its recent high and the consolidation after the trendline breakdown resembles a bearish flag pattern. A flag pattern suggests a measured move that is calculated by taking the height of the flag pole and subtracting it from the bottom of the flag itself. In this case, the target is measured by taking the September high/low range and subtracting it from the 10750 level. The NASDAQ measured move then projects down to and targets the 9500 area. This would be a 50% Fibonacci retracement of the March low and September high rally range. It would return the composite to its 200 day moving average.

On a percentage basis it is a 12% decline from current levels and more than a 20% pullback from its high this month. That would qualify as a correction in strict technical terms. At this point in time this bear flag analysis is speculation. Like all technical patterns it requires confirmation. But it is a textbook set-up. The Relative Strength Index has dropped below its centerline and the Money Flow Index is preparing to do the same. These readings represent a loss in positive price and buying momentum. They reinforce what is playing out on the chart.

A return to the 50% Fibonacci level, while temporarily painful for bullish investors, could be a healthy reversion. But it remains to be seen if the NASDAQ does in fact breakdown or, if it does, the pattern plays out as the chart so neatly outlines.

There is always an event that we look back and say, “Yes, that marked the top.” The much celebrated Snowflake initial public offering may be such an event. It may not be a long term top but the charts suggest we could see a significant pullback.

Take a look at the seven month charts of the Dow Jones Industrial Average and the S&P 500 Index. The rally has been underscored by a strong uptrend line. Over the last two week that support has been tested and appears to be giving way under the pressure. 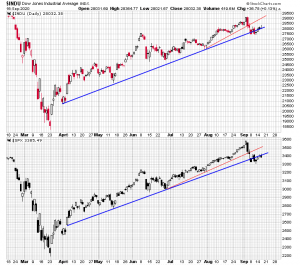 If we zoom in on this chart we see that the price action over the last two weeks looks somewhat like a bear flag pattern. Also, yesterday’s candle on the industrial average formed a gravestone doji. That candle opens near the low of the day and explores higher levels and ends the day closing back on the low. The implications are clear an inability to hold those higher levels. 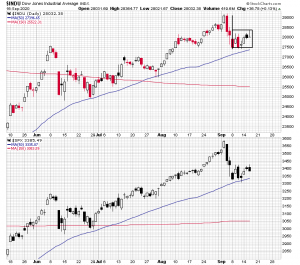 Take a look at some of the big technology names: 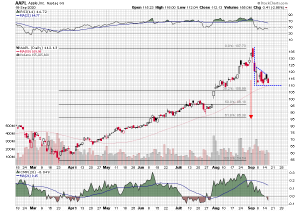 Amazon (AMZN) has broken its 50 dma and is testing support. 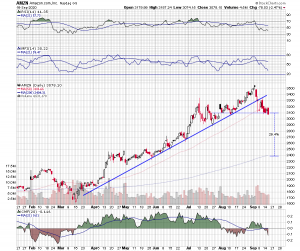 As solid a performer as Microsoft (MSFT) has broken below its 50 dma and formed a bearish engulfing candle on the daily chart. 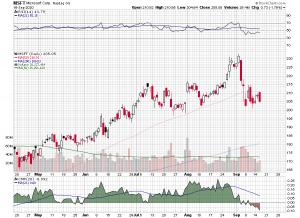 The technology sector started this current market decline and there is no indication it has slowed down.

The stage is set for a meaningful pullback. It remains to be seen, of course, at what levels the sellers feel comfortable becoming buyers again.