Last month a head and shoulders pattern formed on the Dow Jones Industrial daily chart. The neckline of the pattern around the 27500 level was intersecting with the rising 50 day moving average. A break through those support levels projected a return to the 2600 area and had the potential for a much deeper loss. 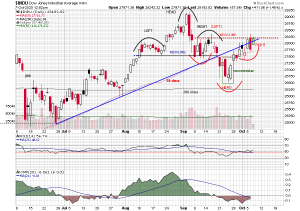 The subsequent break through neckline support reached about 26500 and at this point a morningstar pattern formed. The morningstar is a bullish three day reversal pattern consisting of a large down-day candle, followed by a narrow opening and closing range candle, and completed by a large up-day candle. It represents a transition in trader sentiment from bearishness to bullishness and suggested the pullback was over.

Over the following weeks the Dow moved back up above its 50 day moving average. Now it has returned to the 28500 level. An interesting pattern has formed during this process of pre-breakdown consolidation, then recovery, and finally the move back above the 50 day average. It is an “inverse” head and shoulders pattern. This pattern is the reverse of the normal head and shoulders and it suggests a bottom has formed.

In this particular case, the inverse pattern shares its left shoulder with the right shoulder of the prior head and shoulders pattern. In that way it is called conjoined. This shared pattern may seen unusual but it appears more often than you might think.

The broader market is in rally mode today, at least at this point in the session, and the Dow is attempting to break above inverse neckline resistance. It looks like breaking above this 28250 level is the key to moving higher and making a new all-time high. On the other hand, the old neckline at 27500 looks like support. Taking out that support level could power a move that revisits the September low.