Hasbro (HAS) is not a stock that gets a lot of regular attention. It doesn’t come up on my equity screens very often. Stocks like Electronic Arts (EA) and Take-Two Interactive Software (TTWO) certainly have, as the shift from hands-on play to virtual gaming has continued. So, when Hasbro appeared on one of my long trade screen lists it demanded my attention.

As it turns out the Hasbro charts look good on multiple technical timeframes, as well as the seasonal timeframe. Let’s start with the weekly chart. 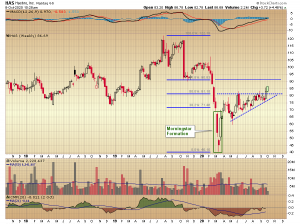 Hasbro’s share price collapsed between October 2019 and the 2020 March low. It lost 60% of its value but after making this year’s low a massive morningstar pattern formed, and the downtrend trend reversed direction. (The majority of readers know what a morningstar pattern is but for those that do not please click here.) The pop that followed the morningstar retraced 50% of Hasbro’s previous decline. Then the stock began making a series or higher lows below the 50% retracement level. This, of course, formed a rising triangle pattern.

Last week the stock price broke above horizontal triangle resistance and we are seeing follow-through this week. The MacD is tracking higher and is preparing to break above its centerline. The Chaikin Money Flow indicator is doing the same. These reading represent positive and improving price momentum and money flow.

There are additional positive technical indications on the daily and the seasonal charts, which we will take a look at in “Part Two” later today.