At noon on Wednesday I Tweeted out “am I the first to call double top?” I attached this weekly chart of the NASDAQ Composite chart. 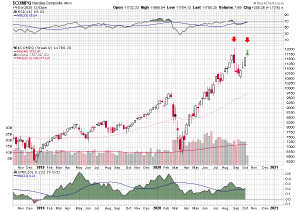 The Tweet was tongue-in-cheek but as it turned out two hours later in another tweet, I noted a possible head and shoulders pattern forming on the daily NASDAQ chart. 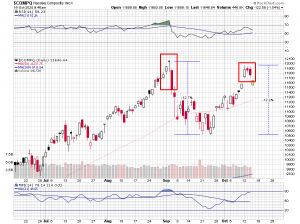 It looked like the one that formed on the same chart in early September. That formation was followed by a 12% decline in the Composite Index. Thursday’s weak open is not validation of the this second head and shoulders top. We will have to see how the rest of the day plays out, but it requires careful monitoring.

If the NASDAQ were to experience another peak-to-trough decline like the one in early September, it would move back down to the September low in the 10,600 area.