Bitcoin has been making a steady series of higher highs and higher lows since it established its March low. In the process, it has also completed the right side of an inverse head and shoulders pattern. This pattern projects a considerably higher price target. But there is another interesting technical dynamic on the weekly chart that can be seen after making a small adjustment to a Fibonacci measurement. 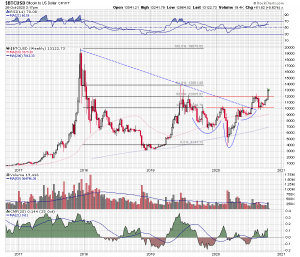 Normally, Fibonacci retracement levels are measured from a previous high to a recent low. But if you adjust that rule slightly and draw the Fib retracement lines on the Bitcoin weekly chart using the 2017 high and instead of the 2019 low, use the 2020 low instead, the new multiple retracement levels fit perfectly onto previous levels of support and resistance on the chart.

Adjusting these Fibonacci measurement points might be called “form fitting” and that would be fair. Nonetheless, I will be watching the action around an advance to 62% retracement level at the 13,861 area or the action around a pullback to the 50% retracement level, near the 12,000 level. They have been relevant in the past and could be again. History doesn’t always repeat itself but it often rhymes.