Poor start to trading this week. The talking heads are out with a number of fundamental reasons for this morning’s downturn, that they didn’t see coming on Friday. What concerns technical analysts is not so much cause but effect. Simply, how information or misinformation plays out on the charts. The pictographs are where the truth resides. 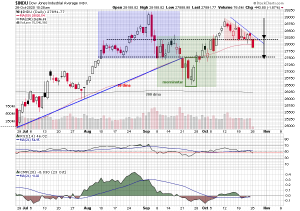 This Dow Jones Industrial Average daily chart has received a lot of use over the last several months. The quality of information it represents has been excellent. Areas of support and resistance have maintained their validity on the way up and on the way down.

The DOW has been finding support in the 28,200 area this month. In September this support level was neckline resistance for a bullish inverse head and shoulders formation (highlighted in green). At this point in the Monday session the 50 day moving average is acting like support. If this level were to fail the next area of support on the chart would be 27,500. A large head and shoulders pattern formed in August and September (highlighted in blue) and the 27,500 level was neckline support for that pattern.

The triangle (highlighted in red) has been the most recent and relevant pattern. Support has broken decisively at this time in early session trading. The next area of support as suggested by the DOW chart is near 27,500. This is former August head and shoulders neckline support. It is also September shared resistance along with the 50 day moving average.

The Dow triangle pattern, like many chart patterns, projects potential price targets, when support or resistance levels are broken. In this case support has been broken. Then by taking the height of the triangle and subtracting it from the support level, we get a downside price projection that targets the 27,500 area. As we have noted this level was both support and resistance at different times in the charted period.

In conclusion, a series of price patterns have formed over the last four months on the DOW daily chart. These patterns have shared both support and resistance levels as they have developed. This occurs because of the underlying fundamental dynamic of supply and demand. Traders should understand how the process reveals itself on the technical level, as patterns on the charts. This particular DOW chart has been very helpful in representing broader market movement.