The broad market indices seemed to have absorbed and then quickly discounted (to some degree) today’s positive Covid-19 vaccination news. Within the first hour of trading the initial rally in the indices began to fade. They wound up finishing the session near their lows. The Dow was still up nearly 3% and the S&P 500 index was up a little over 1%, while the NASDAQ Composite was down 1.5% on the day. But the charts were damaged. 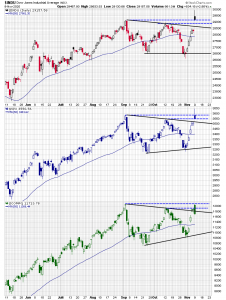 Today’s erratic price action transformed the look of the index charts from bullish to bearish. The great news, while initially reflected in the opening gap up on the charts, evaporated as dramatically as it appeared. Within the first ten minutes of trading the indices began pulling back. Mid-session there was an attempt to regain some of the initial positive momentum, but by 2:00 o’clock the fade returned and accelerated into the closing hour. The candles that formed on the charts look ominous. The price action now suggests a more negative scenario than positive for stocks over the near term. 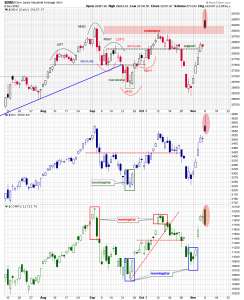 Look at the Dow and the S&P daily charts. Today’s candles are called “shooting star” candles. Investopedia defines a shooting star as a candlestick that forms when a security opens, advances significantly, but then closes the day near the open. The result is a small lower real body candle with a large wick.
Shooting stars are often seen as reversal candles when they appear near old highs or other important levels of technical resistance. An interpretation of the price action suggests that buyers have lost control and sellers are taking over.

On the NASDAQ daily chart a bearish engulfing candle formed and it may be even more negative than the shooting star candles. This particular engulfing candle opened near its high of the day and closed near its low. In the process, “engulfing” with its real body range the entire range of the two previous trading sessions. This clearly negative price action is taking place right near the September and October highs. Of course, this opens up the possibility of a triple top formation.

The upshot of these candles is that it appears investor sentiment may have shifted bearish after turning bullish at the beginning of the month.