Since early September many of the large cap tech names have been moving basically sideways. Amazon (AMZN) shares are a perfect example. They have been headed right on the chart in an increasingly tight series of lower highs and higher lows. The price action formed a symmetrical triangle or wedge pattern on the daily chart. To be more exact the pattern is called a rising wedge because the consolidation came after the uptrend that began earlier this year. 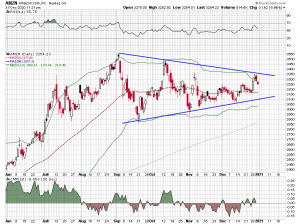 These modified Bollinger band limits may help to confirm an ultimate breakout or breakdown in Amazon’s wedge pattern.