A bullish triangle pattern formed on the Bitcoin chart last month. It signaled a pause in the long term uptrend and the beginning of a consolidation phase. This month Bitcoin is breaking out of the triangle consolidation and is moving higher. 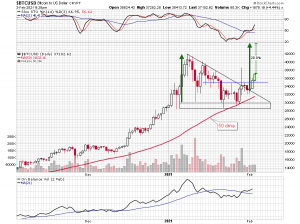 Follow-through price action is suggested by taking the height of the triangle pattern and adding it to the breakout point. This measured move targeted about a 30% move higher. Bitcoin is up 10% since the breakout and has the potential for 20% more upside from its current level.

Bitcoin’s breakout was initiated off a small base just above the 50 day moving average. The average has been steadily rising, tracking from the lower left of the chart to the upper right. Stochastics has crossed above its centerline reflecting improving price momentum. On balance volume is back on the rise and above its 21 period signal average. The combination of positive price action and money flow, and the strong bounce off the 50 day average is a very bullish combination.

If Bitcoin is able to to achieve the measured move target price it would also make a new all-time high. At this point, it is likely that it would begin constructing a series of higher highs and higher lows. This would mark the start of the second phase of its primary uptrend.