The rally in Alphabet (GOOGL) may be over. This is a pretty bold statement considering the strength in the stock over the last six months. I’m not making a prediction but rather reporting on a technical condition on the chart and its implications for price going forward. That’s what good technical analysis does, it suggests possibilities and probabilities. Good traders construct a trading thesis around those likelihoods. 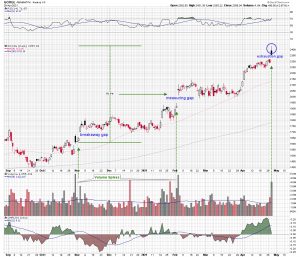 The Alphabet (GOOGL) daily chart is highlighted with three different but related types of price gaps. They are the breakaway gap, the runaway or measuring gap, and the exhaustion gap. This particular sequence of gaps suggest that the rally in the stock has reached an end and it is now vulnerable to a serious pullback.

Let’s take a look at the Alphabet gaps and their technical definitions and significance. The first gap on the chart occurred in November last year and it is called a breakaway gap. A breakaway gap usually occurs on heavy volume and usually signals the start of a significant move. After that initial gap the stock moved sideways and slightly higher into February of this year. Then in February it gapped higher a second time. This second gap is called a measuring or runaway gap. A measuring gap is a sign of continued strength and usually occurs about halfway through the rally move. Alphabet’s measuring gap was exactly in the middle range of what would be the overall range of the rally.

Finally, a shooting star candle gapped up in Wednesday’s session. A shooting star is a candle with a high upper wick or shadow and a lower range close. It reflects an inability to hold a higher price level and, in Alphabet’s case, is made more significant by another gap opening. This gap is called an exhaustion gap, the third and final phase in the three gap sequence. It signals the conclusion of a rally.

Of course, confirmation is key to any pattern target objective or technical indication. A close below the exhaustion gap within the next several days would suggest that the move in Alphabet had come to a conclusion. Follow-through price action will be required to fulfill the most bearish implications of the three gap sequence.