An eveningstar is defined by Investopedia as:

The evening star pattern is considered a very strong indicator of future price declines. Its pattern forms over a period of three days: 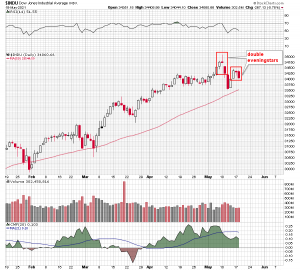 The sequence of candles reflects a transition in investor sentiment from bullishness, to neutrality, and concluding with bearishness. It is usually seen at tops and is a bearish reversal signal. An eveningstar pattern formed on the Dow Jones Industrial Chart last week and a second formed by the end of trading on Tuesday. One eveningstar is negative but for a second to immediately follow the first and make a lower high should be particularly concerning to bulls.

In addition, the NASDAQ Composite has been sending a negative message since the beginning of the month. A close look at the price action on its daily chart shows the formation over the last three days of another eveningstar. And yes there is an eveningstar formation on the S&P 500 chart. 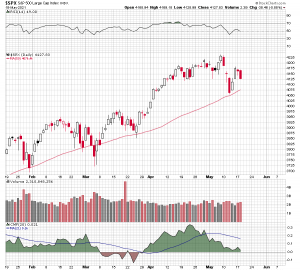 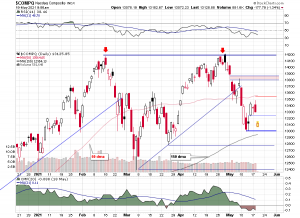