Last week could have been a transitional period for the major market averages. The Dow Jones Industrial Average rolled over and sliced through its 50 day moving average, accelerating lower in Friday’s session. The decline in the S&P 500 Index began on Tuesday and picked up speed as the week progressed closing below its 50 day average. On the other hand the NASDAQ Composite, near its April and February highs, fought to hold that position. But the weight of the Friday decline in the broader market became too much and the Composite closed near its daily low.

This is how last week’s action looked intraday on a 30 minute chart: 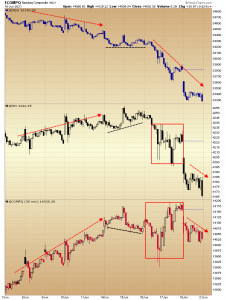 On the daily time frame the declines look as you would expect deeper for the Dow and more subdued for the NASDAQ, with the S&P was somewhere in the middle. Downside Dow volume on Friday was large, about 70% greater than the 50 day moving average of volume. This onslaught of selling pressure took the Stochastic Oscillator into a deeply oversold condition. Bounded oscillators like the stochastic oscillator can stay in an oversold or overbought condition for long periods, but the more optimistic take is that the Dow attempts to moderate about the middle of next week. 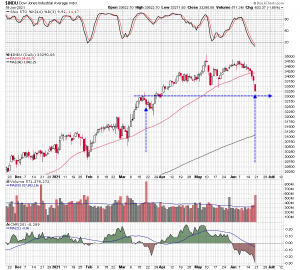 Often the greater truth about price direction over the short-to-intermediate term is found on the weekly timeframe. This is how last week’s price action played out on our index charts. 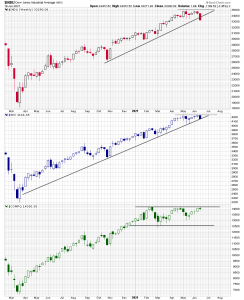 These trend lines however arbitrary have been on these charts for some time. The Dow has sliced through its uptrend line, the S&P is resting precariously on its trend line, and the Composite, again is retesting previous highs. What does appear bearish about the action on the NASDAQ chart is the fact that prior to this week the Dow and the S&P were trending higher. The Naz, however, has ben trending sideways in a horizontal channel. In that context with the Dow and the S&P potentially breaking down the Composite is more likely, in my opinion, to follow lower than lead higher.

What about the monthly timeframe, is it too early to gain some information form those charts? 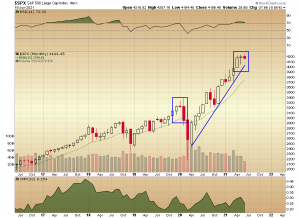 The monthly S&P 500 chart shows the strong rally that began in April 2020 and continued for over a year. This last April was a particularly strong month followed by a neutral May “doji” candle. (Some of you may know where I am going with this.) If the index continues lower next week and closes out the month near its lows, it would form a large dark June candle. This April-May-June pattern of strong up-month candle, neutral or doji-like month candle, completed by a strong dark or down-month candle, is called an eveningstar pattern. It represents a transition in investor sentiment from bullishness-to a more neutral position-to bearishness, and it is considered a fairly reliable reversal sign at or near market tops. A previous eveningstar-like pattern formed on the monthly chart and it marked the conclusion of the 2019 rally.

The overall conclusions to be drawn from this analysis is that all three of the indices have a high probability of continued downside early next week, with possible moderation by mid-week. This Friday’s close will be as significant as was last Friday’s close. A lower Friday close would form a large dark candle on the monthly chart. It would also most probably mean that the NASDAQ Composite had come off its third attempt at moving through the upper channel bound and would probably have dropped below its 50 day moving average. Then there would be talk of the “illusive triple top”. On the other hand, the best case scenario for next week is mid-week moderation and a strong close to the week.

Either way expect volatility next week. It will difficult to trade and should, in my opinion, be observed from the sidelines. There will be a lot to learn from observing next week’s action. I’ll be watching the S&P’s movement near its 50 day average and the integrity of the uptrend line on its weekly chart. On the DJIA daily chart the 3300 level, which was the March high, should supply some support. The NASDAQ Composite is the tricky one. It has room to move around within the sideways channel it has been in for so long, and its a wide range. 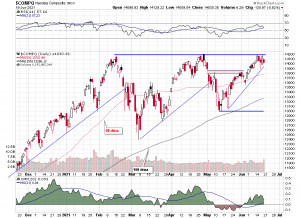 Drilling down on the Composite my focus will be on the uptrend line within the channel drawn off the May low to the current high. The next level of support below that trend line is the 50 day moving average. A break below that average is trouble. Of course, channel resistance is closer than channel support and the Naz spent most of last week testing the upper bound. A break out is a possibility, you know what they say, “there is no such thing as a triple top”. But I do not think it is very likely.

In conclusion, be patient and remember that your first priority as a trader is to protect your capital.