We mentioned earlier in the session on Twitter that we would keep a close eye on the Apple close. Price was pulling back after being higher and it was forming an upper wick on the daily candle. Unfortunately for the bulls it continued to pull back and closed right about where it started, at the lower end the session’s range. This formed a bearish reversal candle called a “gravestone doji”. 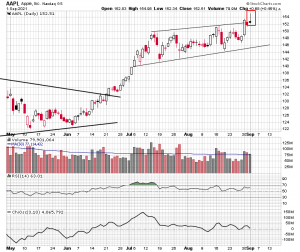 A gravestone doji’s high wick and narrow lower real body is a dangerous signal. It reflects Apple’s inability to hold new highs. The doji is only a single candle formations but when they appear at significant highs or intersect with important trendlines they have to be given serious surveillance. Be alert for confirmation with lower pries tomorrow. The gravestone doji’s signal fails after a close above the candle’s high.